The Columbia Historic Preservation Society Model HO Model Railroad covers 1000 square feet and is HO (1:87) scale. The picture above is located in the Columbia area of the layout. The Columbia area is prototypical (based on what actually existed). The time era of Columbia is 1920-1940. Columbia covers approximately 200 sq.ft. of the layout, and is home to a large roundhouse facility, a major yard, coaling and diesel facilities as well as two railroad stations (Pennsylvania RR and Reading RR).

A Brief History of the Layout

The layout started out in the basement of Jack Belsinger, a Lancaster,PA man. Being from Europe, he modeled European trains. He gave the layout to Calvin Duncan who worked to find a home for it. The layout was smaller than what it is today. In 1993, CHiPS agreed to take the layout. It was cut into pieces and stored in the unused second floor of the history museum. In 1998, work began on preparing the unused second floor, and the layout was reconstructed.

In 2000, it was decided to build an HO diorama of Columbia as it appeared in the first half of the 20th century. Since 2000, all the track was replaced, and Digital Command Control (DCC) was installed, replacing the Zero-1 System. Two foot high backdrops were constructed to isolate various scenes, and to direct visitors up and down aisles around the layout. The layout is an ongoing work in progress.

Roland Zimmerman and his family visited the layout during the open houses. He shot the video below, and added the guitar music. He gave us permission to add the video to our website.

We were given a 24 ft. x 10 ft. HO layout by a man in nearby Landisville. Over a period of 2 weeks (3 evenings a week), seven of us dismantled the layout into eight sections. One of our group obtained a moving van, and in one evening six “muscle guys” moved the sections from Landisville to the train room at CHPS.Most of this layout will be part of the layout expansion project. The layout includes several buildings, all the track and switch machines, a 18-stall scratchbuilt roundhouse and operating turntable. We purchased the turntable system and four Digitrax boosters. Also, lots of trees. 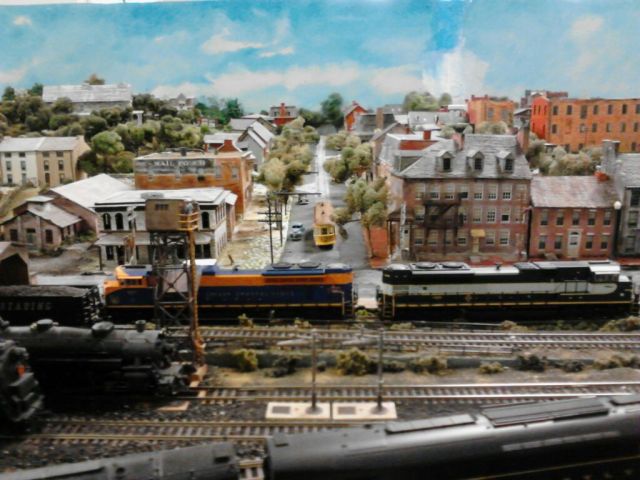